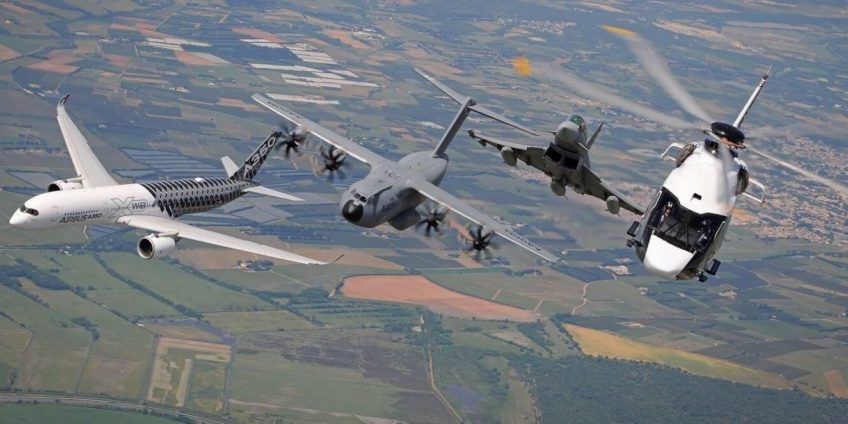 At the Paris Air Show 2019, Le Bourget, Airbus SE will present a broad portfolio of innovative products, technologies and services which meet the aerospace industry’s requirements for today and into the future. This year Paris is also the stage to celebrate Airbus’ 50 years of pioneering progress which created a string of world aerospace firsts to drive the industry’s transformation.

In the flying and static displays at the show, Airbus will demonstrate its modern and highly efficient range of commercial aircraft. The daily flying display will include Airbus’ long-range leaders including the A350-1000 flagship – the world’s most efficient large widebody, and the A330neo which offers double-digit fuelburn improvements over its predecessor. Towards the end of the week and on the weekend, a Hi-Fly A380 will also be in the flying display.

The static display will feature an airBaltic A220-300 and an A330neo flight-test aircraft. In addition, on Tuesday 18 June the first A321neo single-aisle aircraft destined for La Compagnie will showcase its all-business class cabin with 76 full-flat seats on transatlantic flights. Also present in the static display will be the “Vahana” – Airbus’ single-passenger (or cargo), all-electric, fully-autonomous, vertical-takeoff-and landing demonstrator. At this year’s show, there is also a dedicated “Services Centre” mini-pavilion, where visitors meet experts to learn more about how Airbus’ global commercial aftermarket presence, powered by Skywise, can efficiently support airline and MRO operations.

Airbus Helicopters will be highlighting its modular and versatile military platforms at Le Bourget. A full-scale mock-up of the new H160M can be found at the stand of the ministry for the French armed forces, alongside a Tiger HAD and a mock-up of the front section of the NH90 for ‘special forces’. The best-selling H145M and an H125M mock-up will be on display both equipped with the Airbus-designed weapon management system which confers light attack capabilities. The VSR700 unmanned reconnaissance helicopter which has been designed to provide navies with extended surveillance capabilities will also be on show. On the civil side, show-goers can visit the ‘super-medium class’ twin-engine H175 destined for the oil and gas, private and business aviation, and search-and-rescue markets.

Meanwhile, Airbus Defence and Space will demonstrate its broad product portfolio of military aircraft, space systems, secure communications and drones. A highlight is the FCAS Experience Centre where visitors can see what Europe’s Future Combat Air System could look like. In particular it will showcase the interaction and governance of the various components which a European Combat Air System could consist of from 2040 onwards. Over in the static display will be various military exhibits including: the latest variant of the Eurofighter combat aircraft; an A330 MRTT “Multi-Role Tanker-Transport” aircraft; a full-scale mockup of Europe’s “Medium-Altitude Long-Endurance Remotely Piloted Aircraft System (EuroMALE RPAS); plus smaller UAVs such as the ALIACA and DVF 2000 ER designed for intelligence, surveillance and inspection missions. An A400M military transporter in French Air Force colours will also be in the static display.

‘Future of Flight’ display will show how Airbus is further improving its portfolio and changing the future of mobility with aircraft such as the single-aisle A220, A321LR, A330neo, and A350 XWB; It will also feature the H160 helicopter, air mobility initiatives such as Vahana and CityAirbus, and the E-Fan X ‘hybrid-electric’ flight demonstration project.

The second bubble ‘From Data to Insight’ will showcase Airbus’ vision for defence and security including the Future Air Power family of connected systems. This zone will demonstrate how Airbus is harnessing the power of data through digitalisation initiatives such as the Skywise and Smartforce analytics platforms. It will also feature the increasing role that space-based solutions such as the environmental monitoring programme Copernicus.

The next display area, “A Safer World” features Airbus’ Military aircraft programmes such as the Eurofighter and A400M, the secure “Network for the Sky” airborne communications solution, the VSR700 unmanned reconnaissance helicopter, and cyber-security initiatives.

In addition, visitors to the pavilion can experience in full 3D virtual-reality how Unmanned Traffic Management (UTM) digital air traffic management will address the way airspace is configured, to enable safe incorporation of new types of vehicles, such as autonomous ones, into our airspace.

The Paris Air Show runs from June 17 to 23. Accredited journalists are welcome to visit the Airbus Pavilion’s dedicated press area where the majority of announcements will be made. Updates will be available on a dedicated event page of the Airbus website while aircraft visits can be arranged for accredited media between 9-10am each week day.