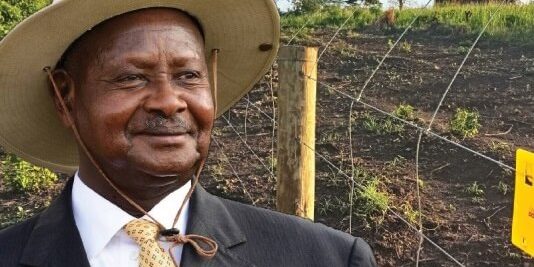 The fence was constructed as an intervention to stave off human-wildlife conflict including marauding elephants that are most notorious at razing crops of communities neighboring the parks. It stretches 10 km from  Kyambura Gorge to  the Eastern boundary of Queen Elizabeth National Park in the Rubirizi district. The  project was funded by the Giants Club, an initiative by 4 former heads of state from Botswana, Gabon, Kenya, and Uganda to save half of the world’s remaining elephants by 2020.

The President commended the Ministry of Tourism, Wildlife & Antiquities and the Uganda Wildlife Authority (UWA) board for implementing the long-awaited government program.

He cautioned the locals against antagonizing conservation, saying tourism now earns more than coffee and other agricultural activities and hence people must desist from asking for park land to grow crops. He told the gathering that government will scale up the program of electric fencing and asked people not to go hunting or disturb the fence.

He also revealed plans for installing CCTV cameras for surveillance against poaching.

Speaking at the same occasion, the Minister of Tourism, Wildlife & Antiquities, Prof. Ephraim Kamuntu, said that the fence was a government initiative to eliminate conflict between wildlife and humans. It is effective because it will shock the wildlife without killing them.

The President delegated the honorable Minister to present dummy checks worth UGX 5 billion (USG 1.36 million) constituting 20% of the park revenues for the last 2 financial years to be handed over to  neighboring districts.

In April 2018, 11 lions, including 8 lion cubs, were poisoned by herdsmen to avenge for the killing of their cattle by lions within the park causing an uproar both locally and internationally.

In recent years, the park has introduced experiential tourism led by Dr. Ludwig Siefert under the Uganda Carnivore Program (UCF) as a measure to mitigate human-wildlife conflict. This activity allows visitors to get up close to fauna, actively participate in  monitoring exotic birds and mammals using locator devices to learn habituation calls, as well as monitor surroundings, weather, and behavior of mongoose and lions. Part of the revenues are used to compensate communities’ livestock or crops that have been eaten or destroyed by wild animals.